Certain political coalitions would like to fan the narrative of the “good old days” or the illusion of “stability” before years prior to the 14th General Election.

However, upon examining the facts, this claim does not appear to hold water.

Investigating key indicators over the past many years would point to contrasting picture against the false narrative. As shown in Figure 1, decades of rule under Barisan Nasional resulted the decline of key environmental, food security, and socioeconomic indicators.

On food security, and in addition to increasing vulnerability to climate change and reduced percentage of arable land as shown earlier, Figure 2 clearly shows worrying economic and food-security performance of Malaysia’s agrofood sector between 2010 to 2020. A common irrational response, or rather, a wrongly-perceived counterweight to these declining indicators is that at the very least, the people who were ruling in the past decades were ensuring the that the economic standing of the Malays would be improved, and therefore, improve the apparent socioeconomic rift between races. Another empirical work reveals that “the Bumiputera in the top income group (the top 1% and the 10%) benefited the most from economic growth”, as observed over the period 2002 to 2014, while population shares of ethnic groups in these percentiles nearly did not change over the same time frame.

In other words, Malay-Bumiputera elites were benefiting the most.

All the above statistics are irrefutable facts on the outcomes of decades of “colonization” by elite political supremacists riding the ethnic and religious sentiment or identity politics in our country for their survival while giving no importance to nation building.

Anyone who claims have felt the “good old days” and enjoyed “stability” were simply unaware that the kitchen was (and is) on fire.

As they say, ignorance is bliss. But the bliss was illusionary at best.

What happens to those who were not ignorant of these issues? That is, when the people experience worsening socioeconomic well-being and inequalities, or when people feel like they are not treated equally and experience an ecosystem is rife with discrimination.

Democracy only works if key institutions are reformed, politicians keep their word, and the vast majority of the people are smart enough to choose what is good for them in the long term.

Therefore, in the absence of a functional democracy, the people will leave.

The severe “Brain Drain” phenomenon is especially problematic as human talents is a key element to reverse Malaysia’s deteriorating situation.

Unsurprisingly, from Figure 5, we observe an exponential increase in the number of individuals, including high-skilled, leaving Malaysia over the last 40 years.

The projected figures indicate that by 2022 global Malaysian diaspora should be around 2 million, while the highly skilled 25 years old and above category probably constitutes about half a million by now.

The only way to stop, if not reverse this trend, is to seriously change how the future of our country is shaped i.e., the policy-making, policy implementation and the governance process.

Without addressing this issue, the outcome is a downward spiral, reinforcing existing problems and creating new ones, as shown in Figure 6. One of the main reasons for the failure of policy implementation and poor governance is weakness in key institutions and governance structures.

Institutions are the formal and informal societal rules of how they function economically, politically, and socially. As shown in Figure 7, extractive economic institutions depend on pre-existing extractive political institutions which are lacking pluralism (recognition and affirmation of diversity within a political body, which is seen to permit the peaceful coexistence of different interests, convictions, and lifestyles) or sufficient centralization (or both) and therefore carrying uncontested power to install the extractive economic mechanisms in the first place.

Unsurprisingly, as shown in Figure 8 the weak governance structure and extractive institutions have resulted in massive leakages, mismanagement, and world-known corruption scandals.

Note that this was based on publicly reported figures, begging the question of how much more may not yet be unearthed. 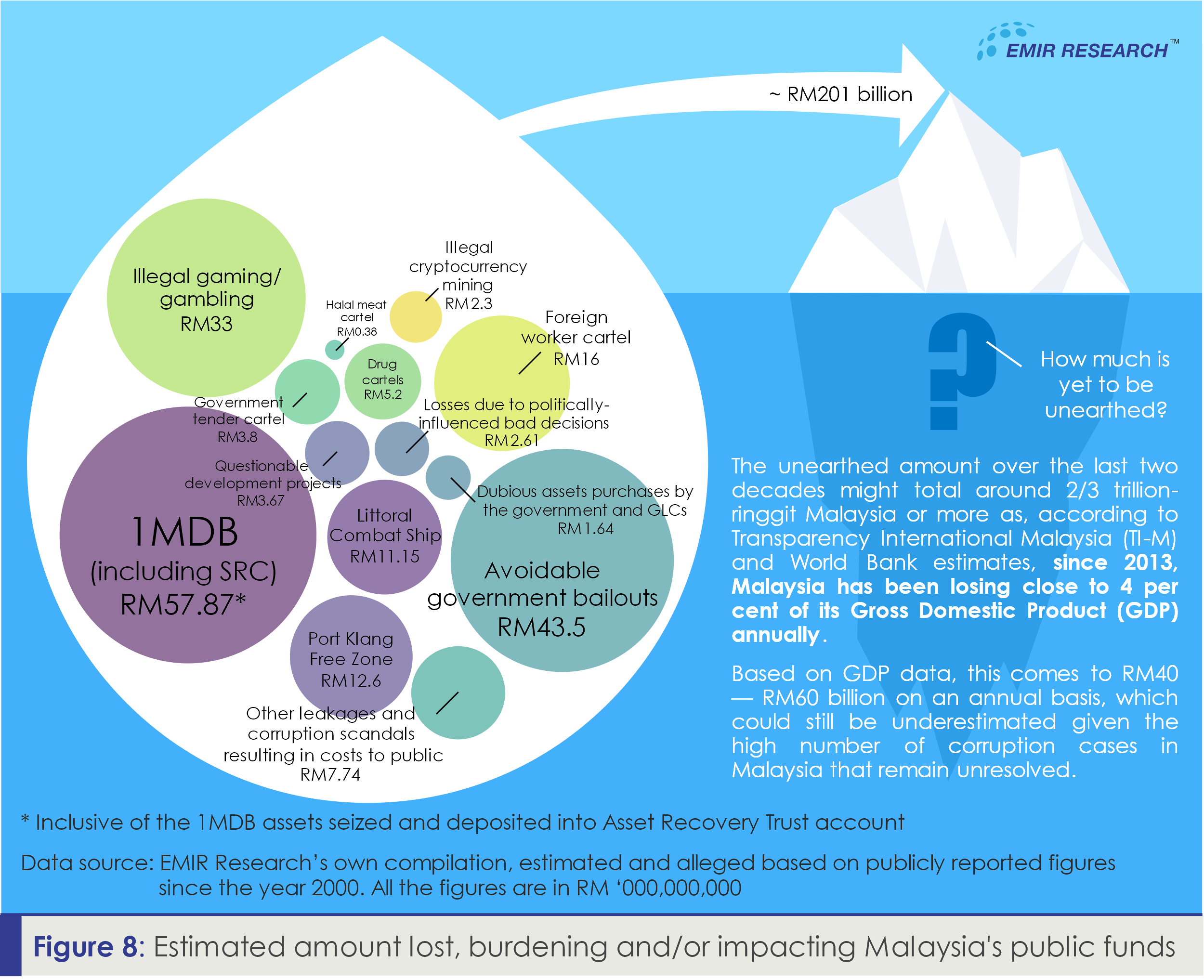 Solutions: Change Starts from the Top

Investigating the problems mentioned above, what Malaysia needs in order to be on the right track is very clear.

The nation needs trustworthy and competent individuals helming key organisations and institutions that are independent and empowered.

Furthermore, these key organisations must operate in a transparent governance ecosystem and use transparent systems.

Ultimately, they must be governed by a clear input-output-outcome-impact (IOOI) (Figure 9) model for effective monitoring and enforcement of strict timelines and key performance indicators (KPIs). Therefore, no policies, blueprints, roadmaps, or national plans can be successfully, sustainably, and fairly implemented without the overarching commitment to key institutional and structural reforms.

In this regard, it is clear that Pakatan Harapan has the edge. Unlike other coalitions, institutional reforms have been their central agenda over the past many years. Comparing GE15 election manifesto clearly show PH’s GE15 Action Plan as the most comprehensive in its reforms proposal.

A group of 70 Malay professors and academics named as the G70, called upon the Rakyat on November 16, on the basis their shared responsibility on the state of the people and the nation, to adhere to strict moral, ethical, and intellectual criteria when voting for a candidate.

This included candidates/parties that upholds national unity and justice for all, free of corruption, and have the ability to rebuild the economy.

Notably, the group called upon the rejection of candidates that utilize fake news and slander, and the exploitation racial or religious sentiments to create discord among the multi-ethnic and multicultural society, for the sake of gaining political leverage.

Supported by A Religious Authority

The sermons for Friday prayers on the November 18 prepared by Perak Islamic Religious Department encapsulated similar messaging on the importance of choosing the right candidates.

The Friday sermon mentioned choosing candidates with dignity, a clean image and free of corruption. These candidates must be strong (not puppets) and have the ability to bring prosperity to the nation and make the country internationally respected.

It went further to describe an ideal candidate as one who is knowledgeable, skilled, honest, sincere, have noble morals and character, practice a simple life style without excessive display of luxury, and carry the nature of Al-Amin, meaning trustworthy, responsible and with integrity.

Looking into the recommended ideal criteria of candidates by the G70 and as well-encapsulated by the Perak Islamic Religious Department, it is clear that Anwar has the edge compared to the other PM candidates.

This is a view shared by the G70 group who found that Anwar as the only political figure with the wisdom, experience, and integrity that can lead the multi-cultural society while upholding core Islamic principles as the official religion of the federation—rebuilding the good image and reputation of the country.

If anyone questions his sincerity, then Anwar’s involvement in the 1974 Baling Demonstration to fight against poverty and alleviate the suffering of the people led to his imprisoned for almost two years.

No doubt this undeniable historical fact shaped Anwar’s political and social viewpoints which was observed later in his career.

Anwar has vast experience as a minister, most importantly as the deputy PM and as the Finance Minister during the 1990s where he proved his prominence in guiding Malaysia through the period of instability during the 1997 Asian financial crisis.

This garnered Anwar many accolades such as being dubbed “Asian of the Year” from Newsweek International, but his advocacy for reforms, accountability, and rejecting bailouts also gained him many enemies.

The G70 group expressed similar sentiments when they said that Anwar and his fellow leaders in Pakatan Harapan are the best choice to bring the nation out of economic crisis towards a better future for all, while still preserving and guaranteeing the integrity of the Islamic faith and the rights of the Malays and Bumiputera.

It was also said during the G70 declaration that other candidates do not instill a confidence of someone that is as well-read as Anwar, who was said to be knowledgeable and remained close with intellectual and academic circles.

Indeed, Anwar is the most scholarly PM candidate compared to the others. As reportedly by various sources, Anwar has held lecturing positions at St. Anthony’s College at Oxford, the School of Advanced International Studies at Johns Hopkins University and at the School of Foreign Service in Georgetown University.

Who among the PM candidates is best suited to lead this multi-racial and multi-cultural nation if not for Anwar, who, as written by Georgetown University, is “respected internationally as a leader in interreligious dialogue and Muslim Christian relations and was one of the early signatories to the Common Word initiative”?

Who among the PM candidates has been recognized in fighting for reforms and justice for all, if not for Anwar who, as written by the speaker bureau Specialist Speakers, was appointed “Honorary President of the London-based group AccountAbility and Chairman of the Beirut-based Foundation for the Future”?

Experiencing unjust dismissal and political prosecution for many years, Anwar could have just stepped back and retired. But he chose to fight on for the nation.

As the longstanding opposition leader, he had acquired a broad view of the entire administration—all its strengths and weaknesses—as he has been on both sides of the aisle.

Can any of the other PM candidates pull out a resume’ such as this? This is a tough job that should come with strong qualifications.

Judging on facts and merits among the options available, we have a clear choice for Malaysia’s leadership post GE15.

Implications of Madani Islam, Ketuanan Islam and Institutional Islam in Malaysia
4 d ago Toll-free travels ahead of CNY
2 w ago
Read More