DAYTON, United States: Donald Trump grabbed the election eve spotlight on Monday to flag an expected announcement on a new White House run, as America prepares to vote in midterms that polls show could land Congress back under Republican control.

The former president, who has never accepted the truth of his 2020 loss, ratcheted up the hints that he would be entering the fray for 2024.

“Not to detract from tomorrow’s very important, even critical election… I’m going to be making a very big announcement on Tuesday, November 15 at Mar-a-Lago in Palm Beach, Florida,” he told a cheering crowd in Ohio on the eve of polls that will determine control of the House of Representatives and the Senate.

The brief mention, at the tail end of a typically dark, rambling speech, came as President Joe Biden made a final appeal in an election in which Republicans are well placed to win at least partial control of the levers of government.

Even if Republicans win only the House of Representatives, that would scupper Biden’s legislative agenda for the last two years of his first term and potentially lead to a weakening of US support for Ukraine’s resistance against Russia.

“Our lifetimes are going to be shaped by what happens,” Biden told an enthusiastic crowd at a historically Black university in Bowie, near Baltimore, late Monday. “We know in our bones that our democracy is at risk and we know that this is your moment to defend it.”

“The power’s in your hands,” he told Democrats. “So vote, get out the vote.”

An influx of far-right Trump backers in Congress would also accelerate the shift that has been taking place inside the Republican Party ever since the former real estate tycoon stunned the world by defeating Hillary Clinton for the presidency in 2016.

Despite facing criminal probes over taking top secret documents from the White House and trying to overturn the 2020 election, Trump is now using the midterms to cement his status as the de facto Republican leader and presumptive presidential nominee.

Monday night’s announcement was the closest the Republican has got to confirming his intention to run, building on his message last week that he “will very, very, very probably do it again.” 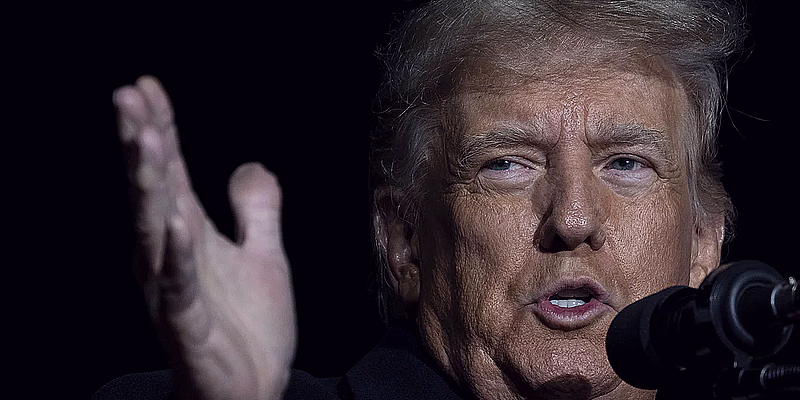 More than 40 million ballots had been cast through early voting, meaning the outcome was already taking shape before polls opened nationwide Tuesday.

Biden tried to remain upbeat during his closing address in Baltimore, but in a call with party allies earlier Monday he conceded that his dreams of keeping Congress, which Democrats currently control by a thin margin, amounted to a “very high expectation.”

Trump Republicans are “some of the darkest forces we’ve ever seen in our history,” he said.

Biden’s speech laid out what he said was “a choice between two very different visions of America,” arguing that his administration has successfully steered the world’s largest economy out of the Covid pandemic, with unemployment at 3.75 percent and manufacturing industries on the rise.

Republicans, he said, would return to “trickle-down economics” that favor the rich.

Polls show that Republican messaging emphasizing four-decades-high inflation, crime and illegal immigration has left voters in an angry mood. As the party controlling the White House and — albeit barely — Congress, the Democrats are likely to get punished.

Returning to the White House on Monday night, Biden told reporters he believed Democrats would win the Senate — though he conceded “it’s going to be tough” to keep control of the House.

If Democrats can’t even hold the Senate, then Biden would find himself in a state of constant political warfare in Washington. There would also be immediate, harsh questions over whether the president, who turns 80 this month, should seek a second term or give way to a younger party member.

Biden’s entire agenda would go into deep freeze. That would raise questions over everything from climate crisis policies, which the president will be laying out at the COP27 conference in Egypt this week, to Ukraine, where Republicans are reluctant to maintain the current rate of US financial and military support.

While insisting he supports Ukraine’s struggle, Republican Minority Leader Kevin McCarthy told CNN there could be no “blank check” — a nod to the isolationist Trump wing of his party and a signal likely sending shivers through Kyiv.

Adding to tensions — and a reminder of Moscow’s murky role throughout Trump-era US politics — Kremlin-connected oligarch Yevgeny Prigozhin boasted that Russia was trying to tilt the outcome.

Philippines expands US access to military bases
2 d ago Hunting pythons in Florida, for profit and therapy
5 mth ago