A government that really cares for the people is one that does everything it can to prevent the floods instead of rushing through an election just to firm up its grip on power.

The meteorological department has reminded Malaysians it is now time to prepare for the year-end northeast monsoon season and the La Niña phenomenon.

The authorities have anticipated an average of between 100 to 900 mm rainfall, meaning over the next six months from October to next March, both the government and the rakyat will have to be adequately prepared for the possible impact from floods, mudslides, powerful gusts and torrential rains.

The National Disaster Management Agency (NADMA) has already identified flood-prone and high-risk areas for various states ahead of the year-end monsoon.

Massive floods as an undesirable consequence of extreme weather patterns from climate change have caught many people off guard.

With memories of the massive floods inundating much of Klang Valley late last year still fresh in our minds, the authorities have warned that disaster-stricken areas in last year’s floods will likely be hit again this year.

In addition to climate change, overdevelopment and unchecked deforestation which destroys the earth’s green canopy are part and parcel man-made factors that have triggered the floods, the most recent being the one in Baling, Kedah.

The World Economic Forum’s Global Risks Report 2022 has stressed that “human-made environmental damage” has been the biggest risk for Malaysia while globally, the major challenges include “climate action failure, extreme weather and biodiversity loss.”

The massive floods in several states of the country last year caused a loss of at least RM20 billion. 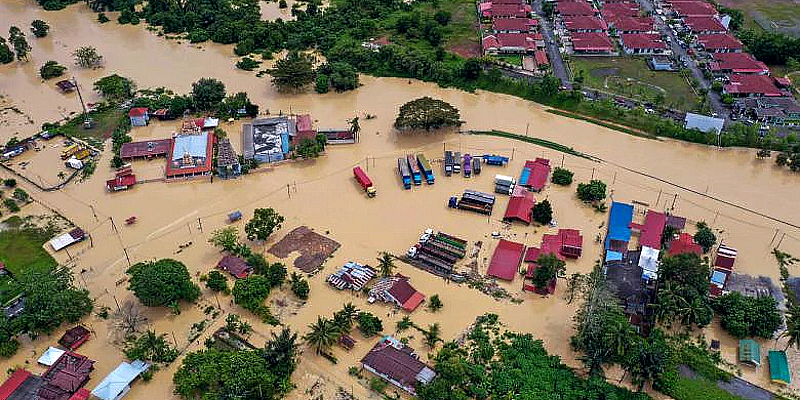 Over the last few decades, successive administrations have allocated billions of ringgit in an attempt to resolve the chronic flood woes.

Sadly, it appears to us that those in power seem to miss the urgency to deal with all kinds of possible natural disasters.

We will need to better improve our disaster warning system in a bid to alleviate the impact of extreme weather patterns.

This will need to be elevated to the national level with comprehensive disaster risk management practices well in place to avoid a similar extent of damages caused by the floods last December.

At the community level, state and district authorities must have thrown in all the necessary preventive measures to cope with the possible floods, including the planning and mobilization of various units such as the fire and rescue department, the civil defense corps and the irrigation and drainage department, among others, so that they can be more responsive to distress calls.

It is hoped that having gone through the painful ordeal last year, we will not see a replay of the utter chaos when the floods struck Klang Valley last year, when many victims had to wait very long time before help actually arrived, while the relevant departments were busy passing the buck.

Having learned the lessons the hard way last year, all relevant departments will have to coordinate and work together more seamlessly so that we can succeed in our flood prevention and management efforts.

Voluntary support and participation of community and non-government organizations must be encouraged. District offices must also have access to more reliable data and information in order to more effectively implement the flood mitigation and risk management measures.

The chaos that we witnessed last year was largely due to the lack of written specifications on how the government and civilians could work together to prevent and cope with the floods.

Apparently, the flood victims could have suffered much less if the government and community organizations had maintained good working relationship in the first place.

Where carbon reduction is concerned, we must be fully committed to our 2030 emission reduction goals. The success of such goals will very much rely on how nations honor their carbon reduction pledges and implement their environmental policies.

As for urban floods, perhaps one of the measures is to strictly prohibit construction activities around water catchment areas. In the event of a heavy downpour, these riverside buffer zones will help minimize the risk of flash floods.

Notably, government agencies such as the irrigation and drainage department at flood-prone areas have already initiated riverbed dredging and clearing of storm drains, which is highly commendable.

Nevertheless, a stringent checks and balances mechanism is of paramount importance to ensure that all responsible parties comply with flood prevention specifications.

With efficiency and transparency, flood mitigation projects can be implemented more speedily.

Malaysians are unable to take the impact from a new round of floods year after year, in particular low-income households that have been badly hit by the spiraling inflation and skyrocketing goods prices, complicated by heavier mortgage burden from higher bank rates.

A government that really cares for the people is one that does everything it can to prevent the floods instead of rushing through an election just to firm up its grip on power. Nearly 1 in 4 globally at risk from severe flooding: study
3 mth ago The role of corruption, overdevelopment and lack of maintenance in flooding
7 mth ago

FGS delivers relief items to Terengganu flood victims
7 mth ago
2021 floods: rescuing stranded animals (2)
“We are too busy from morning till night and have no time to feel sad about anything."...
7 mth ago
Read More