While the Malaysian finance minister is busy recording TikToks to convince the public that the country’s economy is on solid footing, Ringgit Malaysia (RM) continues to descend by breaking all technical levels to watch, invariably putting Malaysia’s foreign debts in foreign denominations in a very precarious situation.

In addition, given that Malaysia has very high net food imports, the food costs for many in Malaysia are expected to rise and run amok.

Malaysia’s unbridled politicking is not helping the ringgit situation either, on the contrary, opening it fundamentally to the levels never seen in Malaysia’s history for more than 24 years.

EMIR Research has previously warned in one of its earlier articles, “Ringgit open for downward speculative pressure?” from December 20, 2021, that such a situation is not completely unexpected.

To re-emphasize again, seminal research in economics and finance over the decades established that the strongest predictors of imminent speculative attack on a currency among many factors are the behavior of the home country’s international reserves, the real exchange rate, domestic credit, credit of the public sector, and domestic inflation.

The appearance of any of these indicators or, more so, their combination severely curtails the government’s ability to defend a speculative attempt to devalue national currency successfully.

Sliding exchange rate, especially in combination with the belief that this trend will continue (based on fundamentals), informs speculators that the government of a targeted country would not opt for the strategy of aggressive borrowing in foreign currencies to stem speculative attack as long-term depreciation will only increase the costs of repayments – both principals and interest rates.

Expansion of the domestic credit, as well as credit to the public, makes intervention through interest rate increase implausible option as doing so may push a large proportion of individuals and companies into default and send turmoil through the entire financial system.

When the above conditions are all met, the government of a targeted country is basically “trapped” or “ripe” for a successful speculative currency attack.

Things have changed since EMIR Research published its warning on the potential ringgit slide, but not in the best direction – the updated figures are as follows.

Malaysia’s foreign currency reserves fell precipitously below the psychological US$100 billion mark in sync with the soaring USD/MYR rate (weakening ringgit) post the announcement by Federal Reserve on the rise of US interest rates, with the latest level reported by BNM at US$96.1 billion while total gross international reserves stood at US$108.2 billion as of August 30, 2022 (Figure 1). 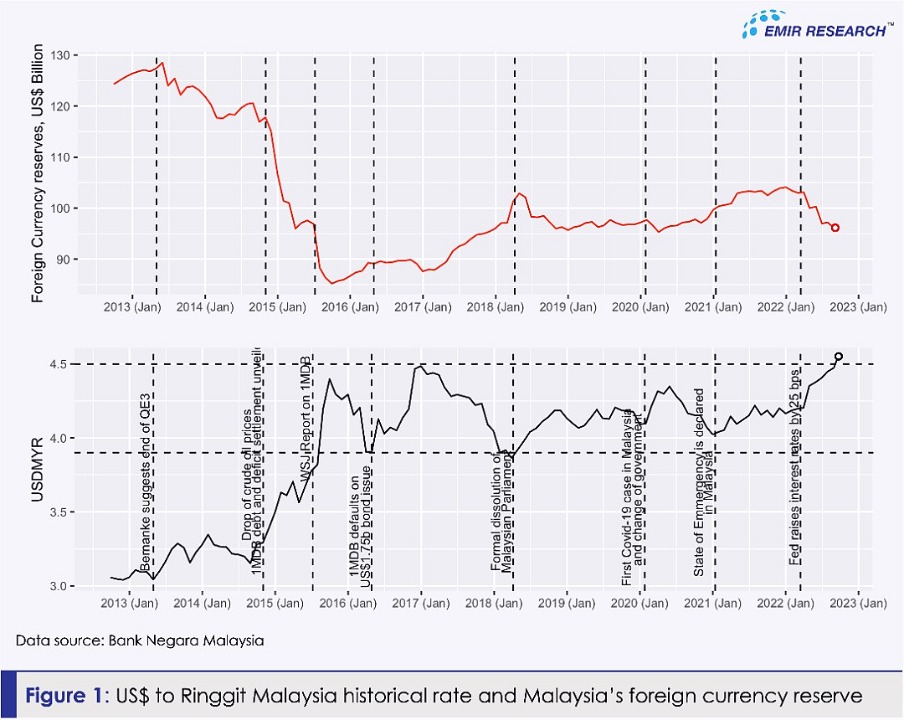 Having foreign reserves this low (and potentially sliding lower) is very critical for a country that highly depends on food imports (RM63.3 billion in 2021).

And, given the high dependency of local food supply chains on intermediate foreign inputs leading to the possible closure of local agribusinesses due to decades-high inflation raging through global supply chains coupled with the persistent absence of credible food security strategy to date, Malaysia’s dependency on food imports is likely to grow even higher.

Sadly, Deputy Agriculture and Food Industry Minister has already warned about such a possibility earlier this year.

Meanwhile, a country’s foreign currency reserves can decline not only on possible forex market interventions but also on managing foreign capital outflows and serving foreign-denominated debt, which becomes increasingly burdensome with the depreciating home currency.

It might sound unthinkable that in a situation of a fragile economy, just beginning to recover after the Covid-19 pandemic and facing severe challenges due to international supply chain disruptions authorities, could introduce an interest rate hike.

Nevertheless, following the global jihad on inflation hysteria, Malaysia has seen three consecutive interest rate hikes from May to September 2022.

After all, the interest rate hike is also believed to ward off currency depreciation. Should the ringgit be stronger fundamentally, Bank Negara Malaysia (BNM) could hold the lower rates longer, therefore, providing more breathing space to the local economic sector due to Malaysia’s high fuel subsidies which can somewhat suppress the headline inflation.

However, given the specifics of the current global and local situation, interest rate hikes can do very little in helping to fight either inflation or ringgit depreciation.

The inflation, much of which stems from energy and other supply shocks, would not be resolved by tightening the money supply.

Also, monetary policy works with a lag! It first triggers losses and contraction in the financial sector, which then transfers to the real economic sector and eventually results in massive unemployment outlays.

Is Malaysia’s fragile economy ready to pay this high price?

Also, it is more logical to expect even more inflation in the immediate term as greater credit costs would leave no choice for the local businesses but raise their prices.

At the same time, ringgit depreciation is primarily driven by investors’ perception of the country’s weak fundamentals, such as colossal trust deficit due to rampant corruption at all levels, both in the private and public sector; absence of clear strategic direction for the national development (take, for example, the catastrophic situation with food security); shrinking complexity of the domestic economy (see for more details, “Putting the Gini back in the bottle”); massive outflow abroad and domestic lack of local talents (see “Stop brain drain or lose lock, stock and barrel”); and unbridled politicking as a final nail.

Notably, political instability is another well-established predictor of currency selloff. Figure 1 above clearly illustrates how politics and corruption have contributed to the ringgit’s woes – ringgit slides against the US$ appear to be highly synced with the slightest signals of political instability.

However, Malaysian politicians, being entirely out of touch with the rakyat reality, are voicing the possibility of near the 15th general elections (GE15), more so, potentially, during the monsoon season, which is already predicted to be highly adverse and massive.

Meanwhile, USD/MYR pair has clearly broken all the important technical levels to watch. And, technically, nothing is stopping it now from reaching as high as RM5 per US$1 (Figure 2), probably finding an intermediate resistance around the 4.8 level unless there is a fundamental reversal in form of credible policy-making and lessened politicking. Nevertheless, the Minister of Finance, Tengku Zafrul Aziz, hastens to assure the public that there is no economic crisis in sight.

During these same quarters, a year back, the pandemic and floods were raging in Malaysia to the extent that the state of emergency was declared with never-ending rounds of Movement Control Orders (MCO). And only in January 2022 the real sector finally got a chance to breathe, judging by the abnormally surging business credit in that month alone.

The same lower base is also the reason that “for the first seven months of this year alone, wholesale and retail trade was valued 19 per cent higher than last year” – another “positive indicator” mentioned by the Minister of Finance in the same TikTok statement. The finance minister has further emphasized that exporters will be happy about ringgit depreciation in a book-like statement, probably, without having a clear representation of how exactly this would happen.

If this is about weakening ringgit stimulating demand for Malaysia’s exports, then we must also understand what will take to expand the production capacity to fulfill that growing demand which in turn is dependent on the availability of at least – if we ignore innovation, in line with the 1980s to 2000s solutions – simple factors of production (land, labor, capital, and entrepreneurship) among which specialists and capital will be the most critical for Malaysia.

Malaysia has been experiencing a severe shortage of highly technically skilled individuals across the industries, including electronics, unless, of course, the finance minister had the low-skilled imported labor in his mind.

As for credit availability, locally, BNM has hiked the interest rate by 75 basis points since May 2022, discouraging business expansion.

At the same time, the depreciating ringgit makes it unattractive for foreign investors to invest in local production as they take their profits in foreign currencies unless it is a foreign-denominated debt which exposes Malaysia to other risks of depreciating ringgit.

Malaysia’s ringgit depreciating less against the dollar than other currencies in the region and even developed countries was another point by the minister.

However, we should not forget that those developed countries are among the most stricken by rising fuel prices.

At the same time, we should not leave out of the picture the fact that Malaysia’s ringgit depreciated against US$ more than our closest neighbor Singapore or even other export-oriented countries such as India, Indonesia or Vietnam (Figure 4).

As well, speaking of ringgit appreciation against some of the currencies, we should not ignore the fact that among these countries, if we talk about major trading partners (Figure 4), are mainly those with whom Malaysia has a positive trade balance. In the end, although the Finance Minister and other avid “proponents” of ringgit depreciation accuse their opponents of looking at only “one side of the coin,” they themselves appear to suffer from myopia, cherry-picking and making broad book-like brush-stroke statements while living numerous parameters out of the equation.

The only credible way to simultaneously fight inflation and currency depreciation is to develop a larger domestic market with less and less reliance on both imports and a seemingly supportive commodity-exporter position.

Expanding the domestic food market with completely localized supply chains should be the government’s priority as its potential spillover effects will deepen and complexify other domestic economic sectors, including high technologies.

Perhaps, only those who welcome colonization, foreign and local, in their country could think of “more benefits” to a depreciating home currency in the modern 4IR world.

And, perhaps, even Najib could have been a better finance minister.

However, it would also be unfair to say that the Malaysia’s finance minister is not doing anything.

On the contrary, he appears to be very busy “persuading” the telcos into the questionable DNB Single Wholesale Network (SWN) model – his apparent “flagship project” for nation-building.

The future is indeed blaise. Back to the future: the original Perikatan BN-PH
1 w ago GE15: Anwar is the clear choice to implement solutions for Malaysia’s problems
2 w ago