ALMERE, Netherlands: An artist’s house is perched in a tree, shipping containers have been turned into homes and caravans house people who have been quicker to grow vegetables than build.

Welcome to Oosterwold in the Netherlands, a commune where so long as you follow certain rules, including dedicating at least half your land to farming, you can build your home any way you chose.

“You can build everything and decide everything yourself,” says Barbara van Schaick, 45, on her plot where potatoes, onions and fruit trees grow near her under-construction house.

The 43-square-kilometer green space in Almere, near Amsterdam, allows residents to move at their own pace and according to their means and desires.

“It’s very pleasant, especially since it’s combined with the promotion of urban agriculture,” says Van Schaick, whose love of gardening spurred her to move from the Dutch capital to Oosterwold two years ago.

This piece of land on the Dutch “polders” — areas reclaimed from the water in one of the world’s lowest-lying nations — had long been used for organic farming.

But in 2012 it was “returned to the people” for this scheme dreamed up by the architectural firm MVRDV and a Dutch politician. 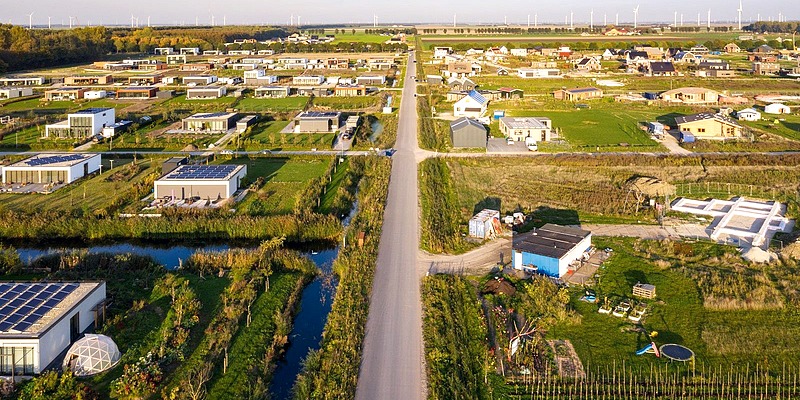 The result is liberal even by Dutch standards.

Once they have bought their plot, future residents have free rein to build housing without planning conditions.

There are rules, but they are environmentally focused.

Buildings must be sustainable — preference is given to gas insulation, heat pumps and solar panels — while half of the land must be devoted to urban agriculture, and living and open spaces must be guaranteed.

Oosterwold is “unique”, locals proudly claim, although seven years after construction began, it’s not all that simple.

Living in an elegant building that blends into its wide green grounds, designed with the help of an architect, Nadine Alsaz says she is in “paradise”.

The 55-year-old, who arrived in Oosterwold in 2017, says relationships are different here compared to the city “where people barely know each other”.

But outsiders often have a “romantic image” of the project, and can underestimate the flexibility and sheer determination needed to keep it running, she says.

Oosterwold’s 2,600 residents have, for example, had to form associations to decide on the construction of roads — a subject of heated discussion in the cycling-mad Netherlands.

“You’d have thought building a road would be easier,” adds Van Schaick, who is still waiting for the neighbors to agree on the development of the bumpy dirt track leading to her plot.

‘Good for the world’

Urban farming remains “a challenge” for those with no experience, says Jeroen Dobber, 39, who mainly chose Oosterwold to get away from government rules.

“I think we need the government (as little) as possible in what we do,” he told AFP.

The residents are of all ages and political opinions, but most have a high level of education, Dobber says. “We lack a variety of backgrounds a bit,” he adds.

And while social housing is also being built, the increase in land prices does not promote diversity.

The initiative has also attracted many project developers, but future residents will still be bound by the conditions.

A second phase of the initiative is due to begin in 2025 and will draw lessons from the first. Authorities from the nearby city of Almere will take over some aspects, including certain roads and drainage.

In total it will provide 15,000 spaces for future housing, and a tenth have already been sold.

She hopes the project, “which is good for the world”, will be emulated elsewhere.