MANILA: Rodrigo Duterte, who steps down as Philippine president Thursday, has earned international infamy for his deadly drug war and foul-mouthed tirades but remains hugely popular among Filipinos fed up with the country’s dysfunction and political elite.

A tough-talking populist and self-professed killer, Duterte launched an anti-crime campaign that has resulted in the deaths of thousands of alleged dealers and addicts while drawing global condemnation.

Yet millions of Filipinos backed the 77-year-old’s swift brand of justice, even as he joked about rape in his rambling speeches, locked up his critics and failed to root out the nation’s entrenched corruption.

His daughter Sara’s victory in the vice presidential race on May 9 showed his popularity remains sky-high, six years after being swept to power on a promise to rid the country of drugs.

That trust was dented by the coronavirus pandemic, which plunged the country into its worst economic crisis in decades, leaving thousands dead and millions jobless amid a slow-paced vaccine rollout.

Duterte’s woes deepened during his final year in office as International Criminal Court (ICC) judges authorized a full-blown investigation into a possible crime against humanity during his drugs crackdown.

Critics of his signature campaign ended up behind bars or facing lengthy jail terms, including opposition Senator Leila de Lima and journalist Maria Ressa, who was named a Time magazine person of the year in 2018 for her work.

Duterte repeatedly said there was no official campaign to illegally kill addicts and dealers, but his speeches included incitements to violence and he told police to kill drug suspects if their lives were in danger.

“If you know of any addicts, go ahead and kill them yourself, as getting their parents to do it would be too painful,” Duterte said hours after being sworn in as president in June 2016.

His unfiltered comments were part of his self-styled image as a maverick, which found traction with a public desperate for solutions to pervasive corruption, dysfunction and bureaucratic red tape.

He freely used vulgarities and even called God “stupid”, a widely disparaged opinion in the majority-Catholic Philippines.

A night owl who turned up his nose at diplomatic niceties, he would show up several hours late to public events — often with his shirt partly unbuttoned and sleeves rolled up — where he gave hours-long stream-of-consciousness speeches.

Duterte was rarely seen in public during the pandemic, apart from weekly appearances on television in pre-recorded meetings with his key advisers.

On occasion, he disappeared altogether, fueling rumors about his health until loyal aides posted “proof of life” photos on social media, showing him playing golf, riding a motorbike or taking a walk.

The former lawyer and prosecutor was born in 1945 into a political family.

His father served for three years as a cabinet secretary in Ferdinand Marcos’s government before the nation plunged into dictatorship in 1972.

An ally of the Marcos family, Duterte even allowed Ferdinand, whose brutal regime silenced the legislature and killed opponents, to be buried in the capital’s Heroes’ Cemetery.

During his long tenure as mayor of the southern city of Davao, Duterte was accused of links to vigilante death squads that rights groups say killed more than 1,000 people there — accusations he has both accepted and denied. His rule was also marked by a swing away from the nation’s former colonial master, the United States, in favor of China.

“I simply love (Chinese President) Xi Jinping… he understands my problem and is willing to help, so I would say thank you China,” he said in April 2018.

As part of that rapprochement, he set aside the rivalry with Beijing over the resource-rich South China Sea, opting to court Chinese business instead.

But billions of dollars of promised trade and investment from the country’s superpower neighbor have been slow to materialize.

In July, he walked back a decision to end a key military deal with the United States.

Duterte failed to tackle some of the country’s worst problems, including corruption, wrongdoing and impunity among local officials and police.

Three Philippine policemen were sentenced in 2018 to decades in prison for murdering a teenager during an anti-narcotics sweep, the first and only conviction so far against officers carrying out Duterte’s war on drugs.

Duterte’s critics hailed the conviction as a rare example of justice and accountability during the president’s reign.

He had said he was ready to go to jail over the crackdown, but vowed never to allow himself to come under ICC jurisdiction.

Characteristically defiant and menacing, Duterte said in May he would continue waging his drug war even after leaving office.

“I will go riding on a motorcycle and roam around… I’ll search for drug peddlers, shoot them and kill them.” Philippines sustains growth but inflation a threat
1 w ago Marcos Jr sworn in as Philippine president
2 mth ago 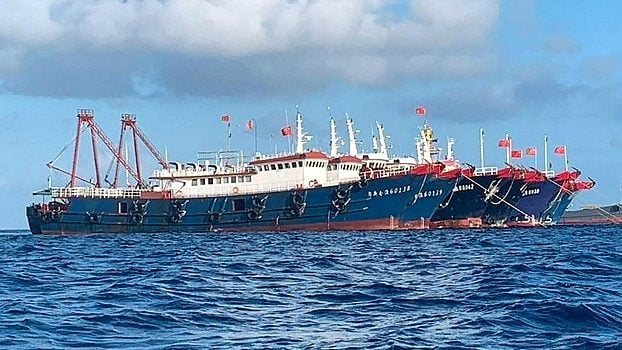