Font
How does one ‘disrespect’ a language?
By：Mariam Mokhtar

If there were a prize for the most preposterous punishment for making sure people learn and speak a particular language, then the gold medal should go to Professor Awang Sariyan, the chairman of the board of governors for Dewan Bahasa and Pustaka (DBP).

Has Awang lost the plot?

At an event to mark DBP’s 66th anniversary, Awang said that individuals who showed disrespect towards the national language would be punished.

The penalty was a hefty fine of RM50,000 or imprisonment.

Awang dismissed suggestions that his proposal was considered a punishment, urging Malaysians to think of it as a move to “evoke love and patriotism towards Malaysia”.

There are several things wrong with Awang’s proposal.

First. What does he mean by “disrespecting” a language? How does one “disrespect” Bahasa Malaysia?

We can disrespect a person by being rude to him or by calling him unkind names. Or we can refuse to follow his orders, or show disrespect by screaming and shouting at him.

We can show disrespect for the rule of law by refusing to obey the rules governing normal behaviors.

We can also show disrespect for various objects like disrespecting the national flag by burning it, or by defacing a person’s portrait.

So, how does one “disrespect” a language? Language does not take on a physical form. It forms part of our intangible heritage and has no physical presence. What does Awang mean by “disrespecting” Bahasa Malaysia?

Second. Instead of him claiming disrespect for the language, did Awang really mean to say that we should stop butchering a language?

When someone butchers a language, he uses incorrect grammar or too much slang, or spell things incorrectly. Did Awang want us to stop butchering a language?

Third. Is Awang part of the greater plot of Ismail Sabri’s government to distract the rakyat from the real issues that concern them?

The things that matter most to the rakyat right now are the rising cost of living, increase in the prices of petrol, energy and food, the shortage of certain foods, the frequent occurrence of floods, poor public transportation system, rising intolerance and extremism in our society, rising unemployment, and who could forget the perennial problems of corruption and abuse of power by politicians.

It is doubtful that Ismail has a clue on how to address the above issues, especially the rising cost of living.

With the public angrily demanding answers, it is not too difficult to rope in Awang and ask him to distract Malaysians by shifting the center of attention from economic issues to “disrespecting” Bahasa Malaysia. 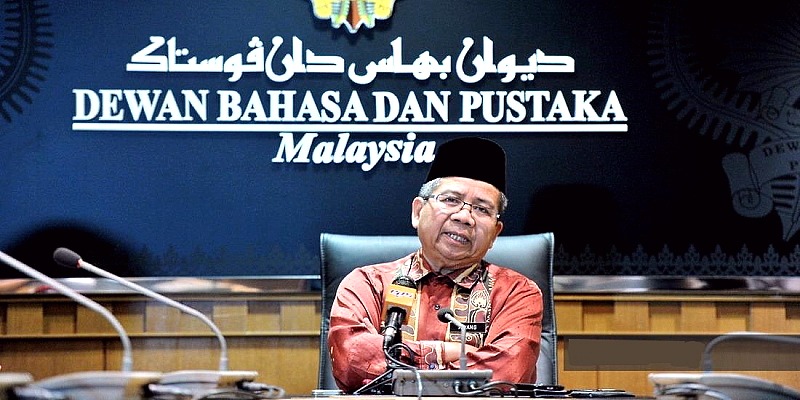 Fourth. If Awang wanted more Malaysians to use and speak Bahasa Malaysia regularly, punishing them with a jail term or fine is not going to endear him to them.

The problem of Malaysians being reluctant to speak Malay, for reasons of their own, lies with the DBP; but more importantly, the buck stops at Awang.

After 65 years of Umno-Baru rule, isn’t it odd how the majority Malay government has not been able to inspire Malaysians to use and speak Bahasa Malaysia?

Has he attempted to find out why? Is it due to low quality teachers? Is it because of sub-standard teaching materials? Are the lessons boring?

If the teachers are themselves not motivated, how can they possibly make their students want to learn the language?

Awang should go back to the drawing board and pick a good team to come up with ideas to encourage greater the usage of Bahasa Malaysia.

He should inspire, not punish.

Fifth. Will there be various levels of “disrespecting” the language? Will children who are not fully conversant with the language be punished with the same severity as someone who is much older?

Children who attend international schools or enroll at overseas schools may not speak Bahasa Malaysia with greater fluency. Will they be punished more harshly than those attending government schools?

Will the Malays be punished more sternly because their mother tongue is Bahasa Malaysia?

Will older people be judged less severely than the younger generation?

Will there be different disciplinary strategies for different groups of people?

Sixth. Many Malaysians expressed total bafflement at Awang’s bizarre suggestion that the proposed fine was “not to punish but to evoke love and patriotism to the country” .

This daft idea is similar to the suggestion that if you do not fly the Malaysian flag outside your house or business premises on Merdeka Day, then it means you are not patriotic.

Awang must get rid of his Umno-Baru style of thinking and genetic make-up.

Speaking Bahasa Malaysia is not the only sign of patriotism and love for Malaysia. Moreover, patriotism cannot be force-fed. There are other ways of being patriotic.

Malaysians who love their country show patriotism by fighting injustices, stopping acts of racism, tackling poverty, and dealing with corruption.

Patriotism is best fostered when every Malaysian is made to feel that he is valued in the country and has a stake in the nation.

He has also exposed his insecurity and failure to encourage and inspire Malaysians to use Bahasa Malaysia.

He threatens the rakyat instead of motivating them. His position is untenable. He should resign.

Najib vs the ordinary convict
1 w ago

Will corruption issues win the 30% Malays to Harapan?
30 m ago