South Korean President Moon Jae-in is finishing his five-year term. Elected after Park Geun-hye became the first South Korean president to be ousted from power after impeachment, Moon has parents from present-day North Korea and was consistently concerned with improving North-South relations.

He worked as a human rights lawyer with Roh Moo-hyun for many years, and when Roh Moo-hyun became president, he was appointed Chief Presidential Secretary and realized the Inter-Korean summits of 2007.

At the time that Moon became president, North Korea was moving forward with nuclear and missile tests, and it was hard to see that dialogue would follow, but Moon did not speak ill of North Korean leader Kim Jong-un and instead always calmly appealed for North-South dialogue.

You could say he is a man of convictions. Kim suddenly announced that North Korea would take part in the Pyeongchang Winter Olympics on New Year’s Day 2018 and shifted to a dialogue offensive against South Korea.

When Moon welcomed Kim’s younger sister Kim Yo-jong and President of the Presidium of the Supreme People’s Assembly Kim Yong-nam to the Blue House (Korean presidential office), he was all smiles.

There have been three rounds of Inter-Korean summits, with many agreements being reached with regard to military affairs and economic cooperation.

In 2018, when it was in a dialogue mood, North Korea did not conduct a single nuclear or missile test.

Out of the 11 years the Kim Jong-un administration had been in power, this was the only year with no tests, and it would be fair to say that it was a result of Moon Jae-in’s convictions.

However, things soon took a turn for the worse and the situation on the Korean Peninsula did not fundamentally become more reconciliatory.

The direct trigger was the breakdown of the North Korea–United States Hanoi Summit in February 2019.

Kim once again withdrew from the international stage to focus on strengthening his country’s military power as he grew increasingly distrustful of Moon, who had claimed that they should be able to have the economic sanctions lifted if they make certain concessions, such as closing the Nyeongbyeon Nuclear Scientific Research Center.

Moon’s efforts to become a mediator and adviser between the United States and North Korea ended up backfiring.

Moon could not ignore the fact that not only South Korean conservatives but also centrists have become increasingly distrustful of North Korea.

Not only that, but he continued to look at the United States for directions, while failing to realize a stop to U.S.-South Korea Joint Military Drills, which has long been a North Korean desire.

Moreover, he ended up making North Korea more skeptical by increasing national defense spending more rapidly than South Korea did under the conservative administrations of either Lee Myung-bak and Park Geun-hye, seeking to advance the development of submarine-launched ballistic missiles (SLBM).

Comprehensive agreements were reached at the Inter-Korean summits, especially with regard to economic cooperation, but Moon was unable to send anything to Pyongyang unless economic sanctions against North Korea were lifted or eased through progress in U.S.-North Korea negotiations.

From North Korea’s perspective, all Moon did was raise expectations without providing any economic benefits.

South Korea’s plan to “take the wheel” on the Korean Peninsula situation has been utterly derailed. In order to take the wheel, it is necessary to understand Washington, and sometimes it is also crucial to persuade the Japanese.

This is because the Shinzo Abe administration, which wanted to put pressure on North Korea, continuously put the brakes on dialogue with North Korea, and tried to get Trump to do the same.

When opinions differ between South Korea and Japan, the key becomes to whom the American president listens, so Moon found the existence of the conservative hardliner Abe to be an uncontrollable “evil.”

Some believe it was good that no half-hearted “denuclearization” agreement was reached at the North Korea–United States summits, but it is unfortunate that North Korea’s stance has since become so rigid.

Reading Kim’s letters to Trump at the time, we find the expression “fools of the south” and that less attention was gradually paid to Moon.

Still, Moon sent a letter to Kim at the end of his term and was able to receive a reply the next day.

I believe it would be meaningful to restrain the conservative President-elect Yoon Suk-yeol by solidifying that the North-South dialogue was not in vain.

However, the letter exchange was not reported in North Korea at all.

This suggests that North-South relations will not be able to return to a dialogue phase for the time being. Was North Korea’s military parade a superspreader event?
2 w ago 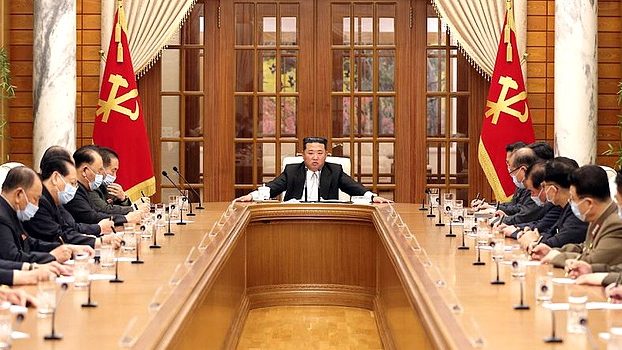 Getting away with murder in Pakistan
30 m ago