Recently Malaysians have been informed that the Sultan of Selangor has bought a painting depicting the Malaysian parliament being full of monkeys and frogs presided by a human Azhar Harun and another assistant speaker portrayed in human form.

In this article, I wish to discuss some light and serious interpretations as well as implications of not only the painting but also the manner it has been portrayed in a social media platform.

I would like to explain, firstly, that I have had two semesters of Art History in the Western World at a university in the US. The two subjects opened my eyes to the appreciation of artworks in the form of paintings, sculptures and architecture.

The names of Rembrandt, Leonardo da Vinci, Michelangelo, Caravaggio, Pablo Picasso, Piet Mondrian and Salvador Dali are still etched in my mind as to their paintings and sculpture.

Art in the form of painting, I learned, is a form of communication that words cannot convey effectively.

The novel ‘Shit’ by Shahnon Ahmad depicting Mahathir and Umno was an art form of political criticism of the harshest kind in the Malay literary world.

Zunar and Lat also have artworks depicting political satires and criticism that can reach vast audiences with a clear and memorable message to the public.

The first interpretation of the Monkey-Parliament painting is an obvious one, that our parliamentarians are no better than monkeys and frogs in their party-hopping and shouting matches without content and clarity.

Many Malaysians are tired of politics and it’s plays and dramas while the rakyat suffer without computers, food and help from the floods.

I think many Malaysians would agree with the artist on this message.

The second interpretation may be unintentional and would be questioned by a minority group of Malaysians.

There are politicians of integrity that do not resort to shouting matches and vulgar words and so why are these politicians also depicted as monkeys?

Furthermore, many supporters of Anwar Ibrahim, Hadi Awang, Mahathir, Lim Kit Siang, Ahmad Zahid, Ismail Sabri and Najib would remind the artist that only a few like Azmin, Zuraida and Saifuddin Abdullah are frogs but why is everyone depicted like monkeys who could jump trees even further than frogs?

Perhaps the artist thought that all of them deserve to be monkeys and frogs because of the MOU signed by the majority of the opposition with the government.

Is the artist also saying that since all parliamentarians are depicted as monkeys and frogs, that would mean Malaysia should not be governed democratically by the rakyat through their elected representatives?

Is the artist saying that reverting back to a feudal system like Brunei and Saudi Arabia would be better for the country? Or perhaps Malaysia should be governed by strongmen like the dictators in Russia, North Korea or China?

I believe in the freedom of artistic expression but it should be tampered with cultural and religious sensitivity.

Once a young minister from a Malay party accused the rakyat demonstrating during Reformasi times as ‘beruk-beruk’, but now it seems that the prophecy has come true that the rakyat indeed are being depicted as beruk-beruk by the artist since the MPs in parliaments are ordinary rakyat.

Besides the interpretations of the painting, I would like to discuss on the implications of the artwork now that it has been shared widely in social media as well as the news media for public knowledge.

The first implication is, can the artist portray political leaders like the prime minister and opposition leader as animals or other forms of caricature like a clown?

Fahmi Reza portrayed Najib as a clown and is dragged to prison by the police. Zunar suffered the same fate in depicting many political cartoons including the prime minister’s wife in extremely funny forms.

Because the royalty did not buy or support Fahmi’s or Zunar’s depictions, it was a crime, but the present artist’s work shall now not be considered a crime because it finds a royal fan?

Secondly, the Islamic adab established by the Prophet Muhammad is that one can criticize openly the leadership in Islam but one should not make fun or disrespect any leader. This is clear in his tradition.

Secondly, one shall not make jokes of another by calling him or her derogatory names of which that person disagrees with.

Thus, if one were to call Harith Iskandar ‘Botak’ and he is OK with it, then it is fine. But it is not OK in Islam if Harith disagrees with it, and the person then owes Harith an apology in this world, and if not he or she will have to answer in the Day of Judgement.

Now, I do not agree that anyone should be sent to prison or be killed like in the Charlie Hebdo case just by drawing cartoons, but it should be understood that leaders must be shown due respect and people cannot be made fun of if they do not like the portrayal.

There is no such thing as ‘freedom of artistic expression’ without social consequences in Islam.

Finally, I find the fact that the palace officers might not have been acting in the proper manner when they published the painting in the palace social media.

If a royalty has bought a painting for a private collection as in this case, then the painting should be accorded due privacy from the public eyes.

What if a Malay royalty bought a Renaissance painting depicting Jesus on the cross suffering the crucifixion for mankind, how would the conservative public react?

As a learned scholar in art and architecture, I would praise the royalty for having an open mind about different faith, culture and political understanding, but the conservative public would be shocked and might think the royalty was supporting Christianity!

I feel that the office bearers of the palace must exercise discretion at the type of paintings and artifacts that the public should see as being purchased by the royalty as a private collection.

The line between the monarchy and the people’s rights under the Constitution is a very delicate one, and displays on social media of this kind may bring undue criticism of the royalty that should never have been there in the first place.

In conclusion, although the painting shows the disgust of Malaysians with their elected political leaders, it also raises very serious questions about the future of democracy in Malaysia, the question about artistic expression and the delicate political balance between the people and the monarchy.

I believe in the freedom of artistic expression but it should be tampered with cultural and religious sensitivity.

I totally disagree that any artist should be imprisoned for ‘insulting’ anyone but merely given the proper criticism and admonishment by social and religious leaders of the community.

In any event, the Parliament of Monkeys has entered a historical page in Malaysia’s social and political history. 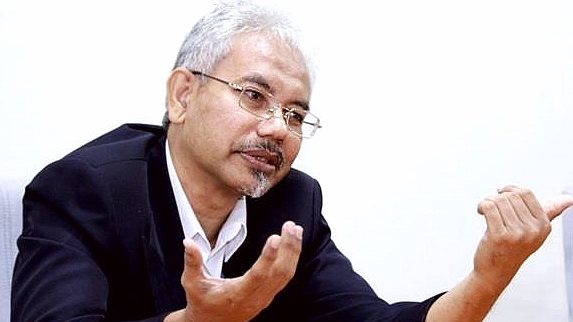