PYRAMIDEN, Norway, Feb 8 (AFP) — With its bust of Lenin, cultural center and KGB offices, the abandoned Soviet outpost of Pyramiden may seem like a time-warped Arctic oddity but is valued by Moscow as it vies for clout in the warming region.

Russia has made the development of the Arctic a strategic priority, pinning its hopes for supremacy in the region on a fleet of giant nuclear-powered icebreakers.

Norway — a NATO member — was afforded sovereignty of Svalbard under the 1920 Treaty of Paris but all signatories, which included the Soviet Union, were given equal rights to explore and exploit its mineral resources.

Russia began coal mining in Barentsburg, another settlement in the archipelago, in 1931, and later in Pyramiden, where the Russian community grew to up to 1,200 between 1960 and 1980.

Being sent to Pyramiden was considered a plum job for a miner, a tour guide told AFP.

On the Western side of the Iron Curtain, it provided a window on Soviet power, culture and self-sufficiency, from pig breeding to its 300-seat cinema, swimming pool, gymnasium and hospital.

But as the Soviet Union fell apart, while mining continued in Barentsburg, it stopped in Pyramiden in 1998 as its performance dwindled, and the miners left.

At first sight, Pyramiden now looks like a ghost town.

No one lives there apart from a handful of Russians who run a hotel — and the polar bears with whom visitors risk coming face-to-face.

But even though the mining community has long gone, nothing as been destroyed, an AFP photographer saw, and its vestiges offer a glimpse into the heyday of the Soviet era.

Buildings built to last are just weather-beaten from decades of harsh winters.

The rails of the funicular on which the trailers of coal were hauled down are still visible on the pyramid-shaped mountain, which gave the village its name.

Inside the buildings, it’s as if time has stood still, with the occupants having left suddenly but expected back at any moment.

Phials of ore are lined up in display cabinets in administrative offices, where calendars still hang on the walls, while the KGB premises have reinforced doors and miners’ files spread out on the tables.

Classrooms are adorned with children’s drawings and the teacher’s cup is still there.

But Yury Ugryumov, of the Arctic and Antarctic Research Institute based in Saint Petersburg, said Pyramiden was not just a place of historical memory.

“This village is not abandoned, it has been temporarily put on hold,” he told AFP.

Russia is currently developing tourism and research in Pyramiden, drawing glaciologists, hydrologists and marine experts there for scientific work.

“There’s hopes for an interesting future here,” said Ugryumov, who heads the Russian Arctic expedition to the archipelago. In Norway, old oil platforms get a second life
2 mth ago 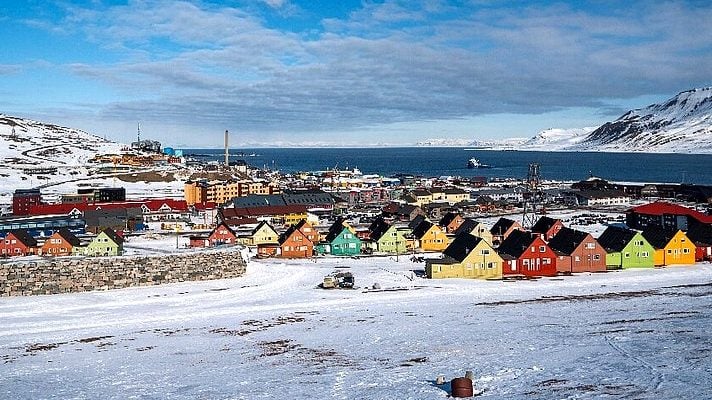 Liberty is in our DNA: Ukraine’s long history of fighting for freedom
3 mth ago
Read More