Font
Isolation and innovation: two years of the Covid-19 pandemic

In the early months of the pandemic, the prevailing scientific advice was that frequent handwashing would help stop the spread of Covid-19.

Health authorities urged people not to touch their faces with soiled hands and shared techniques on how to apply soap, while in many countries hand sanitizers became ubiquitous.

But as the pandemic wore on and scientists were able to study real world examples of how the virus spread — at a choir practice, in a bus or across a restaurant — a consensus emerged that this disease was largely transmitted through the air.

The virus travels in clouds of particles that we emit when we breathe and especially when we speak, shout or sing.

In a closed and poorly ventilated room, these aerosols can float and drift in the air for a long time, greatly increasing the risk of infection.

But the importance of good ventilation to disperse these contaminated clouds — like clearing cigarette smoke — is not always well understood by the general public.

“There was a communication error: we scientists were not clear enough about ventilation,” said Arnaud Fontanet, of France’s Scientific Council, a body that guides government policy.

“When scientists talk about protective measures, we have to make it clear to people that ventilation is a part of it,” he told AFP.

As a direct result of the awareness of aerosol transmission, the discourse on masks has radically changed in two years.

Initially, the World Health Organization (WHO) and many governments insisted that masks should only be used by caregivers, patients and their close relatives and not by the general public.

But many supporters of generalized mask wearing saw that as a way to conserve limited supplies and prevent a shortage for caregivers.

By spring 2020, there was an abrupt policy change and the mask became an essential tool in the fight against the pandemic, becoming mandatory in some places.

As more contagious variants have emerged, people have been advised to ditch their simpler fabric masks in favor of the super filtration of surgical masks.

And with the surge of the extremely contagious Omicron variant, many scientists are now advising people to wear even more protective masks like the FFP2 or N95 when in crowded indoor spaces.

The coronavirus has claimed millions of lives around the world since it first emerged two years ago, but that toll would have been far higher if it had not been for vaccines developed in record time.

Against all expectations, the pandemic showed that it is possible to design new vaccines against an unprecedented disease, and then start administering them worldwide in less than a year.

In the past, that process typically took 10 times longer.

Just over a year after the start of the global vaccination campaign, around half of the planet’s population is fully vaccinated against Covid-19, according to the University of Oxford’s website Our World in Data.

However, the vaccine rollout has confirmed fears that protection against the virus would be mired in inequalities between rich and poor countries.

WHO chief Tedros Adhanom Ghebreyesus wants 70 percent of the world’s population to be vaccinated by July and has called for an end to vaccine hoarding by richer nations.

“If we end inequity, we end the pandemic,” he said in his New Year message.

…but no magic bullet

Vaccines have been hugely effective at protecting against serious forms of Covid-19.

But they have been less effective at stopping the pandemic because they do not prevent people from spreading the virus.

Their overall effectiveness also decreases over time, while they have been shown to generate a weaker antibody response against the latest variants — Omicron and previously Delta — than against the historical strain of the coronavirus SARS-CoV-2.

Although there is mounting evidence that Omicron is milder than previous variants, rich countries have scrambled to accelerate booster campaigns to restore protection against infection.

This has heightened fears that rich countries will continue to monopolize vaccine doses, even as the virus spreads in poorer nations where people have less access to protection.

It is also not yet clear how long the effects of booster shots will last, and experts have warned that relying on them can only be a short-term strategy.

“Vaccines AND, not Vaccines ONLY will end the #COVID19 pandemic. No one solution is enough,” she tweeted. The three COVID-19 pandemics
5 d ago 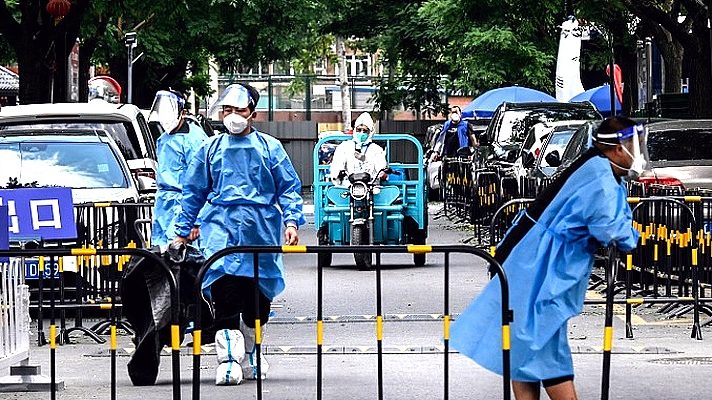